Emirates Islamic, one of the leading Islamic financial institutions in the UAE, has been named the Fastest Growing Bank – UAE at the Banker Middle East Industry Awards 2016, in recognition of its exceptional growth in 2015. The award was received by Syed Muhammad Umair, Head of Priority Banking, Emirates Islamic at a ceremony held recently at Emirates Towers, Dubai.

Commenting on the award, Jamal Bin Ghalaita, Chief Executive Officer of Emirates Islamic said: “We are extremely proud to be recognised as the Fastest Growing Bank in the UAE. This award is a testament to the success of our transformation strategy launched in 2011 with a clear objective to become the leading Islamic bank in the country. Our numbers speak for themselves; in terms of year on year growth in Total Revenue, Operating Profit and Net Profit, we are far ahead of our competition and these outstanding results are a culmination of the efforts put in by the entire team at Emirates Islamic, along with the wholehearted support of our Board of Directors.”

In addition to the bank’s successful financial results in 2015, Emirates Islamic has also implemented several innovative financial solutions that largely contributed to the growth of the Islamic banking sector in the UAE and the wider region. Following the launch of the path-breaking NASDAQ Dubai Murabaha Platform, the bank introduced EI trade in November 2015 - a fully customisable Shari’a compliant online trade finance and supply chain platform that allows the bank’s business and corporate customers to process funding contracts in an entirely paperless environment. Earlier in the year, the bank announced a key consumer study - The ISLAMIC BANKING INDEX by EMIRATES ISLAMIC™ - which delivered key findings on consumer attitudes, namely penetration, perception, knowledge and intention, towards Shari’a compliant banking in the UAE and highlighted the immense potential for the growth of Islamic Banking in the nation. Following on its commitment to engage better with customers and improve the customer experience, the bank has also increased its social media penetration, becoming one of the fastest growing banks on social media in the past year.

Continued Bin Ghalaita, “I would like to add that our financial success has given us the ability to contribute more to the betterment of the overall community, with over AED 30 million distributed to a range of charitable causes in 2015 through our Emirates Islamic charity fund. We believe that the UAE can easily achieve its objective of a truly happy society, with the support of all organisations and individuals.

“Going forward, we are determined to fulfill His Highness Sheikh Mohammed Bin Rashid Al Maktoum’s vision of making Dubai the global capital of Islamic economy and will continue to focus on our core values of ‘Innovation’ and ‘Customer First’, to continue expanding boundaries and raising the standard of the industry into 2016 and beyond,” concluded Bin Ghalaita.

The Banker Middle East Industry Awards 2016, sponsored by the CPI Financial Group and now in its eighteenth year, covers all financial services including retail, corporate, investment, private banking, asset management, fund management, finance companies and consultancy practices. Over 200 institutions were nominated across the region from UAE, Qatar, Saudi Arabia, Oman, Kuwait, Bahrain, Jordan and Lebanon and the winners were selected after a stringent analytical process and 15,000 individual votes. 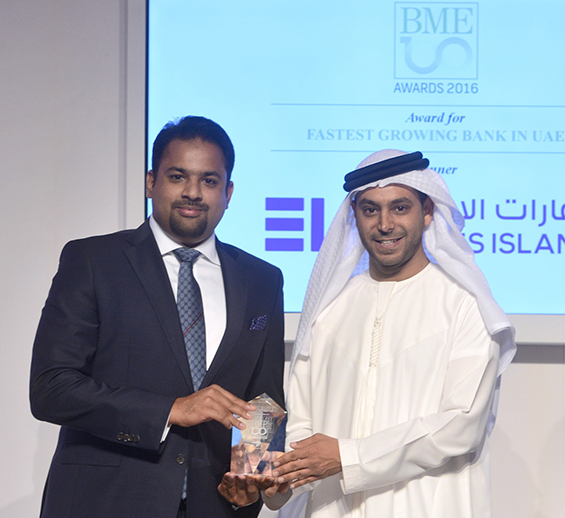